Posted on February 24, 2014 by katiezanestrand

After moving around too much during our first month in South America we decided on a much needed extended stay in one place.  We rented a great little apartment in downtown Santiago for the week with a mountain view from the deck, a kitchenette, and a TV for Olympic coverage.  It is hard to describe how a bit of normalcy put us back on balance after our whirlwind of adventures.  There was a supermarket under our building so Zane cooked all the meals and they were the best meals we have eaten in South America!  Each night consisted of sipping cheap Chilean wine admiring our view and feeling like we truly lived in the city.  The place also had a rooftop pool which we took advantage of and enjoyed a few runs in the nearby parks.

Zane being the sweet, amazing husband he always is surprised me for Valentine’s Day with champagne, cheese, chocolates and more.  He cut hearts into the cheese and had a ‘9’ candle to represent our 9th Valentine’s Day.  He puts up with me when I turn into a crabby, crazy woman and is always doing things to make me happy.  He simply is the best.

We took a free walking tour of the city and learned much about the history and fun fact about how the coffee shops started and more.  Santiago holds more than a third of Chile’s population at 6 million people.  There are a lot of museums, parks and plazas, which unfortunately where largely under construction due to citywide renovation project.  Since we had such a great view of the city from our apartment we didn’t climb San Cristobal Hill where their statue of the Virgin Mary is accompanied by a half a dozen radio towers.  But we did climb the other lookout point in the Forrest Park.   Also enjoyed was a lovely seafood dinner at the famous Central Market.  It has a feel of Seattle’s fish market and definitely has the same smell.    We tried the typical Chilean dish of Machas a la Parmesana, which are razor clams with melted cheese and lemon.   Unable to leave the fish market without trying Ceviche we were disappointed that it was not near as good as the Peruvian version. 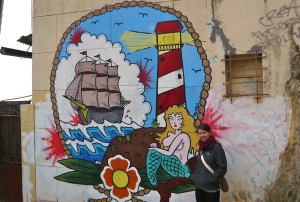 Our final 2 days were spent in the seaside city of Valparasio, which has been named a UNESCO site and known as ‘Little San Francisco’ because of the 42 hills that surround it.   More accurately described by Lonely Planet it is a city that never combs its hair.  As a port city that smells of fish and urine it is covered in graffiti and is so dirty.  But it has an artsy and bizarre attraction to it.  We ran along the poorly maintained boardwalk one morning to come upon the most appalling scene and filthiest fish market.  Never have we seen so many seagulls, pelicans and sea loins in one area as the fisherman were dumping the remaining fish  guts over a pier every few minutes to feed to them.   Naturally there shouldn’t have been this many of these animals together which has an after effect of much bird poop and gives them no need to hunt their own food.  It was crazy and we were sad we didn’t have our camera with us to document the encounter. 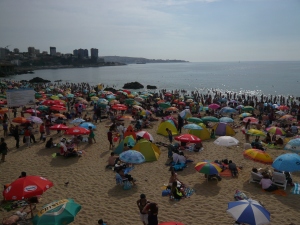 Our hostel had a great rooftop patio with a view of the colorful, hilly city and the port, which was great to wake up to.  They had a party our second evening with an unexpected surprise of live music.  Our other mission was to get to a Chilean beach before heading south so we headed to Vina del Mar just a few miles up the road.  The first beach didn’t allow swimming, the next one you couldn’t even see the sand there were so many people and umbrellas but the third one was small with not so many people.  Zane caught some waves, Katie enjoyed her daily ice cream and we soaked up the sun.

View from apartment in Santiago

This entry was posted in Chile and tagged Santiago, Valentine’s Day. Bookmark the permalink.

1 Response to Santiago and Valparaiso