Posted on December 16, 2013 by katiezanestrand

From Singapore we made our way back to the capital of Malaysia, Kuala Lumpur (KL) for a few days.  Again, Malaysia is unique in that it is a blend of Malay, Chinese and Indian people but unlike Singapore it is an Islamic nation.  It is such an amazing balance of culture, religion and food.  If you want to visit Asia and don’t have much time we highly recommend Malaysia for the mixture of these cultures.  You can see a great city, ancient villages, highland jungles, islands, and beaches.  It is a great place for us to end our Asian adventure but we do wish we had spent more time in this underrated country.

Finally we tried a Hop on/Hop off bus in KL, which we have been meaning to do in other cities.  It is a great way to see a city from an open bus top and can get on and off as you please.  The National Museum educated us more about how and when Malaysia was officially made a country.  Made our way to Chinatown for some excellent Indian food!  Pulled tea and Naan have been staples in our everyday diet here.   Also visited the Petronas Twin Towers, which are the tallest buildings in Asia, but were too cheap to head to the top for the view.  Instead, we made our way to the Sky Bar, which is in Traders Hotel on the 33rd floor and got the best view at night of the Twin Towers.   Other stops were the Royal Palace, Little India and KL Tower.

The city is quite clean and very commercialized, at times it felt like we were in America.  The neighborhood area of our guesthouse, Hotel Al Jafs, offered us cheap, local food each day, which was such a bonus.  Our days revolved around eating as usual trying Shwarma, Chicken Rice, and so much Indian food.

After the Cameron Highlands we stayed in KL for two more nights.  Meet up with an old friend Matt, who Katie went to school with in Australia, who was kind enough to take us to Batu Caves, a Burmese restaurant, show us Ramly Burger (double special with cheese), and house us for a night. 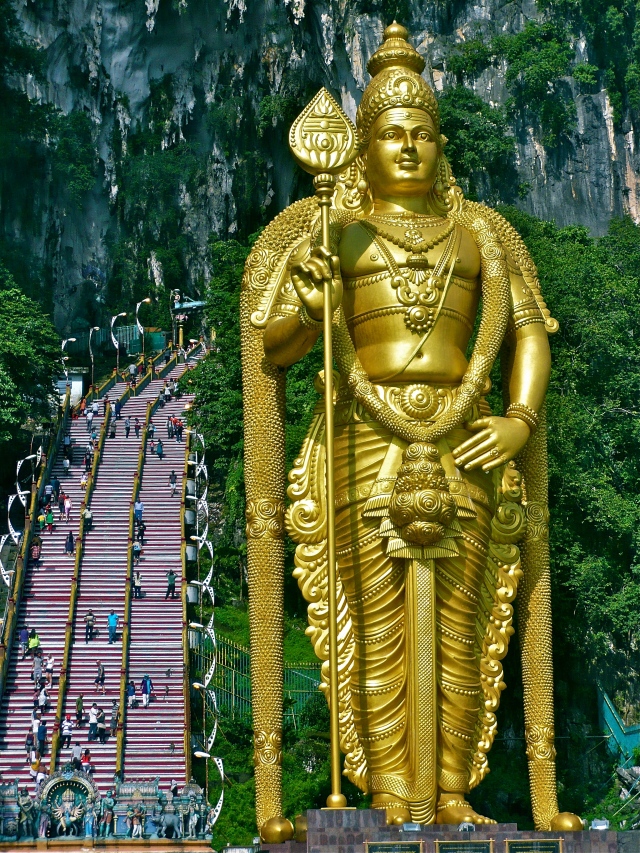 Batu Cave outside of KL

It has been hard to get in to the Christmas sprit in this tropical climate but are extremely excited to be coming home for the holidays.  Hopefully we will be able to see many of you in the three weeks we are home before we fight off to South America.  Homebound, we head out today our 30 hour journey to the states.