Posted on August 14, 2013 by katiezanestrand

Our trip started with a 3-hour delay to our midnight flight leaving Shanghai to Manila, which is the capital of the Philippines and one of the most congested cities in the world.  Because of this delay we missed our connecting flight but several of the Zest Air employees told us they would take care of this for us.  But after two hours of watching the manager calling various people they were no help and we had to re-book and pay for a new flight to Caticlan.  Not an ideal way to start our first day but a good introduction to lowering our expectations of things not always going our way.

We had a much better experience with Pal Express Airlines and arrived in Caticlan, caught a tricycle, which is a motorcycle with trumped up sidecar and is their main form of transportation.  Once at the jetty, we took a pump boat to get to Boracay Island.  This was a cool experience, the boat literally landed on the beach of Boracay and you had to get your feet wet to get from boat to land.   On the way, while taking in the sites and sounds Zane stubbed his big toe and peeled a dime size piece of skin.  Having to doctor his toe mixed with us both feeling a bit under the weather forced us to slow down our next couple of days.

Several words come to mind to describe our accommodation in Boracay but now that it is in the past let’s use the word comical.  We found a charming place called Melinda’s Garden online for the first few nights in a cottage with air conditioning, hot water and a frig.  In order to save some money we opted for a room the remaining nights without these amenities. To our surprise we moved into the cottage next door that had no real floor, walls or roof just bamboo slabs that we could see through to the ground, but it did have a thicker mosquito net.   During the next days in this bamboo tent we experienced the most intense thunderstorms, many mosquitoes and one of the largest spiders we have ever seen.  The evenings and sleep weren’t the most comfortable but we enjoyed the beauty of the island by snorkeling off shore on reefs, sunbathing, reading, running on the beach, and eating local.  Filipino noodles dishes, chicken adobo, mangos (eaten everyday) and whole roasted chickens were our favorites on the menu.  Boracay’s White Beach is about 7km long with Station 1,2, and 3 as your options to stay at.  It is very touristy and it’s known to be the best place in Asia to kite-surf.  We enjoyed the quieter/budget end at Station 3 and got good at saying no to the constant selling of massages and boat rides.

After 8 days in Boracay, two flights, one pump boat ride, two tricycle rides, and one bus ride later we arrived at the island of Palawan in Puerto Princesa.  Locally recommended, we stayed a lovely bed and breakfast called the House of Rose.  We explored the city on foot, trike and Jeepney, which is a popular form of public transportation.  They are known for their crowded seating and flamboyant decorations, which have become a symbol of Philippine culture and art.  Sites through the city included Baker’s Hill, which had the best chocolate cake for about 50 cents and a Lychee/Buko shake.  Lychee is a fruit with a similar taste to a grape but has a strange fussy/spiky shell you peel off and Buko is their word for coconut.  We also took in the Baywalk and ate Crocodile Sisig that they claim is very good for your health.

In 2011, there were 7 new ‘natural’ wonders of the world named.   One of them is the Underground River outside of Puerto Princesa.   It is a river that travels 8.5km into a cave with 4.5 of it is navigable by boat and then flows into the sea.  After a 10 hour day of gaining permits, lots of waiting and a rollercoaster van ride we got to take a 45-minute paddle through 1.5km of this river cave.  On our journey we saw many monkeys, two huge monitor lizards, unique stalactites and stalagmites, hundreds of bats and mounts of bat guano.

There are about 7,100 islands in the Philippines and over 100 different language dialects with Filipino (Tagalog) and English being the official languages.  Everyone is fluent in English, which makes it so easy to travel around.

Some general observations about the Philippines: There are stray dogs, cats and chickens everywhere.  Cock fighting is legal.  Similar to China, in the countryside Water Buffalo are used on all the farms and rice fields.  We are woken up each day by roosters and construction. Every village has a church and a basketball court.  Religion is very apparent and they are very kind people.

Currently we are in the Northern part of Palawan called El Nido.  Several Filipino teachers in China recommended this place to us.  It is a very small tourist hot spot, so small that they turn the electricity off everyday from 6am to 2pm.  Tomorrow we are island hopping and snorkeling since the weather has become better now that the Typhoon has passed.  Hope you enjoy the pictures. 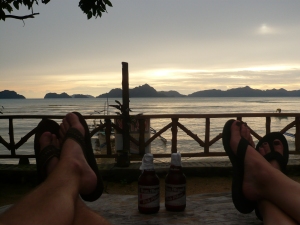 This entry was posted in Philippines and tagged Boracay, Philppines. Bookmark the permalink.